It looks like that The 2time and Zlaner are ready to rock again, Dr DisRespect and Zlaner are going to play in a 100K COD: Warzone Charity tournament on the Verdansk map of Call Of Duty: Warzone on the 12th and 13th of April.

Excited to announce that I teamed up with Activision and CODE4Vets and am going to be hosting my own 100k Charity Tournament on FacebookGaming.

Things looking pretty good as recently the “Drippin In Heat” duo wasn’t allowed to play on Verdansk map of Call of Duty on 1st March as the Doc was not allowed to play on the tournament because of his Twitch ban. Before at Vikkstar Warzone Showdown, The Two-Time did not have much luck in the Winners’ or Losers’ Bracket. However, this time the famous Warzone duo is stronger and Drippin in Heat.

The Charity tournament is organised by Stone as he teamed up with Activision & Code4Vets. David Steinberg aka Stone Mountain (born May 22, 1992) has 3,123,658 Facebook followers, he is one of the most followed Facebook streamers of Facebook Gaming. He created his name in honour of his first console, the Nintendo 64.

He launched his YouTube channel in 2011 and has been uploading gaming videos ever since. On Facebook, the streamer plays games such as Escape from Tarkov, Call of Duty: Modern Warfare, and Apex Legends. He is a partner on Facebook Gaming and Stone having a 404K following on Instagram. 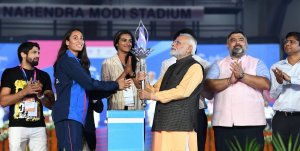 Trending
BJP’s big announcement, every child born on PM Modi’s birthday will get a gold ring, knowing the price will blow his senses

Champions Club in support of Dr Disrespect, Dr disrespect vs Nickmercs and TimTheTatman