Indian BGMI players have been asking for the new BGMI logo and finally the wait paid off and Krafton has finally revealed it. Since Battlegrounds Mobile India is predominantly referred to as BGMI, Krafton came up with a dedicated logo for the battle royale game.

New New BGMI logo is launched by Krafton. Since its release, BGMI has gained over 50 million downloads on the Google Play Store and has a great rating of 4.5 stars. iOS players can also enjoy the game as it is available on the Apple App Store after a long wait.

Krafton has finally unveiled the official logo for BGMI and the players are quite excited about it on all social media platforms. Finally, a short video clip was uploaded to the official social media handles as well as the YouTube channel.

The clip shows how Krafton received a huge amount of requests for the official logo reveal. After much anticipation, the developers finally delivered in the last few seconds of the video.

Krafton had previously released the logo in a dramatic video, showcased way back in May 2021. It spelled out the whole name of the title, ie. Battlegrounds Mobile India, instead of using its acronym, BGMI.The previous logo also had a hint of the tri-coloured flag as “Battlegrounds” was written in saffron, “Mobile” had a white backdrop, and “India” was presented in green.

Dhanashree Verma dancing on the roof in World Cup happiness, Check out the video 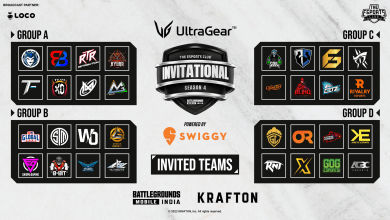